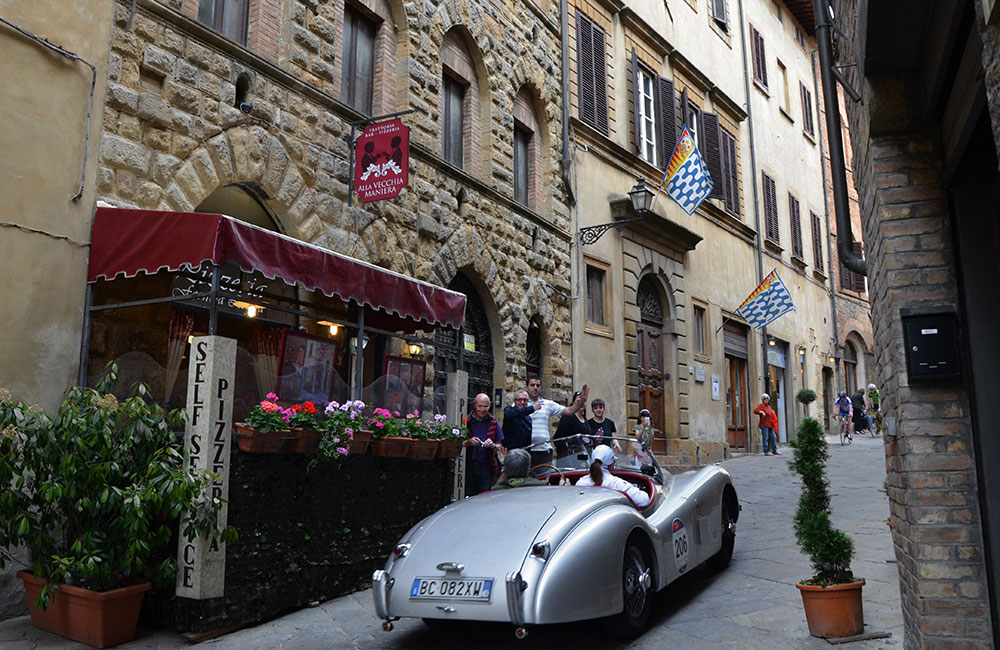 The palace was composed by the accumulation of more ancient homes. In the main facade on Via Ricciarelli, two corps can be identified: a two floors plus ground floor main corp, with rectangular windows and ogival door, framed by drafts, and a marquetry on the first floor; and a simple and without profiling three floors plus ground floor lateral corp. Corrado Ricci, in his guide of Volterra, edited in 1926, defines this kind of Volterra buildings  in Florentine, because they reproduce charactersof the Florentine Guadagni palace attributed to Simone del Pollaiolo. In the early nineteenth century, the palace was enlarged and renovated , perhaps even the beautiful entrance door belong to this era. In 1830 a terrace was built, with apartment, above the unlivable attic in the part of the no-profile building, located on the main prospect of Via Ricciarelli. In the twentieth century the new owner Brunellesco Dello Sbarba leaves the facade substantially unchanged but builds an apartment over the terrace.

The construction of Palazzo Contugi is dated to the fourtheenth century. Part of a group of buildings that introduced in Volterra the rich use of the bugne façade, built using the local bench stone; the building is on three floors, in addition to the ground floor and basements; the three orders of windows are located inside ogiva arches, separated by stone string course.

A rareness in the facade, the children’s windows reachable in very few palaces in Volterra and Florence, and the coat of arms of the Contugi family, an important patrician family of Volterra.

Ricciarelli Family owns the first floor, and from the middle of the eighteenth century even the second floor, the Franceschi Family owns the rest of the building. The second floor was part of the noble floor of Ricciarelli Palace, accessible from the stairs where in the 1700s was located the kitchen and other rooms, the first floor was connected with mezzanine’s floor. At the end of the eighteenth century, the third floor was acquired, connected to the second floor of  Ricciarelli Palace, and part of the ground floor. In the following century the Ricciarelli will become owners of the entire palace, joining the ground floor and the cellars. In 1920, Brunellesco Dello Sbarba, new owner of the palace, restores the façade, reopening the vaults of the windows and the children’s windows that had been closed.

The Pagnini Palace, with a beautiful coat of arms of the family on the facade, is characterized by an over-elevation in bricks over a stoned ground floor and arched windows in Florentine style; these windows, once large glass-windows, are now reduced to the size of classic rectangular windows.

The Pagnini family, originally from Prato, is a historic Volterra family admitted to the patricians of Volterra and Florence, a branch was admitted to Lucca. In 1831 Ottaviano Ricciarelli bought from Bitossi the house already Nannelli and  Pagnini. The house is divided into apartments to rent, but some rooms of the first floor are connected to the palace and one of them is frescoed by Lodovico Gamberucci.

Cinci palace is large and simple, adjacent to the Palazzo Contugi,belonged to the Cinci family for centuries. Annibale Cinci was born here, an important person,author of a famous guide of the town. This palace, originally on two floors plus ground floor, was raised by Brunellesco Dello Sbarba, who built the third floor.

No more informations available about the building of the palace.

In the back, the buildings property  Ricciarelli and then Dello Sbarba appear as a single corp. Brunellesco Dello Sbarba between 1924 and 1926 buys from Edoardo Verdiani and the Bishop’s Mensa, other properties in Via Del Mandorlo, on the opposite side of the road. In the gardens of the purchased buildings, he built a hanging garden located on the edge of the castle walls of the city, linking it to the palace through an overpass made with a boat launcher from Venice.